As a military and law enforcement veteran, I make it a point to do at least four (4) donation builds each year.  I specifically do these builds for any military or law enforcement cause that requests it from me.  This year (2017) has already been booked  solid, having done two LE good cause pieces and two military (USAF Security Police/Forces) causes.

I never require payment for these builds, but I do require verification from the requesting party or organization, that the piece will be used as a donation or to generate funds for the specific cause.  If the party/organization insists on paying me something, I will usually only request postage or minimal material reimbursement fees, never full price of the item.

If you have a cause or organization that is military or law enforcement connected, feel free to contact me.  I usually require at least 4 months advanced notice due to build times and materials logistics.

Thanks for your support and God bless!

I just wanted to drop in and show a few WIPs (Works In Progress) from the shop this week.  Some are commissioned pieces and some will be made available once completed.

We are constantly receiving new orders when the books are open and trying to develop and produce new and unique knife and tool designs. 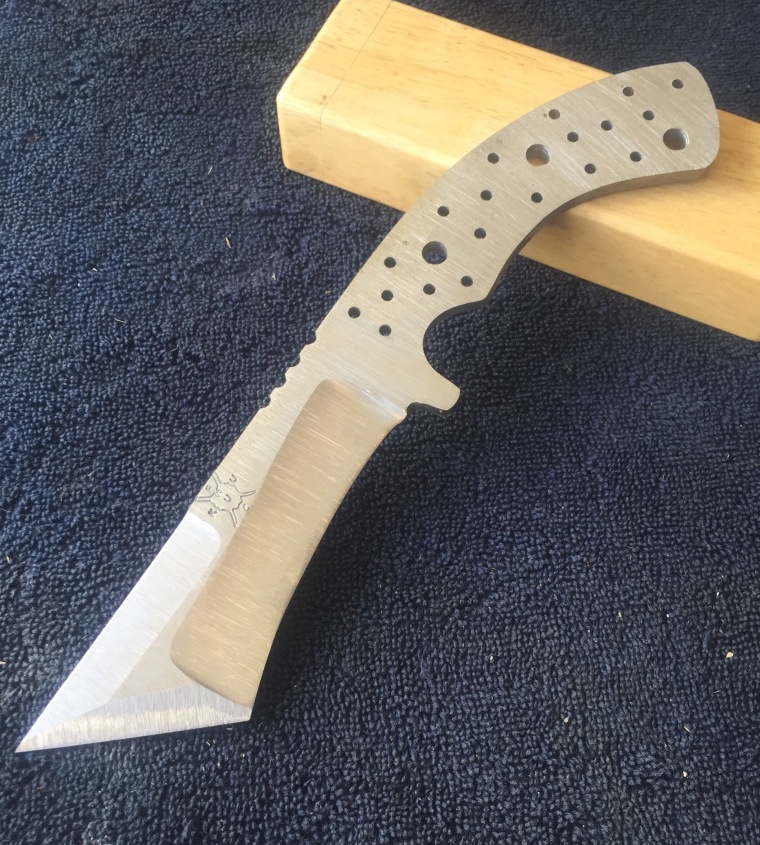 So, from the beginning when I started making custom knives for my clients, I wanted them to experience and feel as if they were part of the entire process.  I did not want to just leave them with an empty initial consultation, where we discussed the details of the build, from the steel used, to the design, the materials, and of course, the hard earned money they were willing to pay for a custom knife.  I wanted them to be an integral part of the development, up to completion, and to aid in building a better customer relationship.

From the time we (the client and I) agreed upon the minutia of the build, I would send them photos and video of the steps taken to produce the knife they were willing to wait for me to make for them.  They would see the piece of steel billet, unformed, flat and uncharacteristic, to having the shape of the design drawn on to that empty canvas.  A photo would show the rough cutting out of the blank before it was taken to an 8″ stone wheel to clean up the edges.

These would be followed by pictures of a clean, well profiled blank of the knife design, taking shape, with minor detail such as a choil, pin and resin holes, jimping, and sometimes the maker’s mark stamped into the metal.  Next, they would get to witness the bevels being cut into the blade…the ricasso, the plunge lines, the personality of the knife, beginning to appear.  Once those were completed, preparation for the heat treatment would ensue.

The client would be able to see the blanks coated in anti-scale agents, then placed into the heat treat oven to undergo three separate cycles of normalizing to even out the carbon steel molecules.  The pictures would show the red hot metal glowing, having reached a temperature where the steel loses its magnetic properties (in excess of 1450 degrees).  These three cycles would give way to hardening, where the knife is taken to a set temperature, allowed to soak, and then hardened by quenching in oil, to increase the toughness of the steel and create martensite, which is small, fine grain structure in the steel.  Finally, a couple of tempering cycles in the oven to make the knife a bit less fragile and the final steps could begin.

Once the knives are clean from any scaling, they would be taken to the grinder in progressive grit sanding belts to the desired finish on the bare metal.  Handle scales, pins, and such are gathered, then the final finish is placed on the knife.  This could be anything from stonewashed, to blued, so acid etched, and so on.

At last the handles are put on the knife, shaped, and polished.  The edge is put on the blade making it shaving sharp, and a sheath is made for the client to safely carry.

These steps can take anywhere from a few weeks to couple months, depending on the specific build, its requirements, and the number of total orders in a batch. Each one of my clients gets to experience the build to the best of my ability to provide such to them.  I plan on doing an page on the site in the near future showing the build of a knife in pictures and videos, so anyone visiting the site can get a small glimpse of the heart and soul of the knife maker that goes into each blade.

You may also contact me and we can send you on your own journey with a knife that would be made specifically for you.

We have added a link on the bottom of the right side of the homepage in order to enter your email address and follow our blog.  I thank everyone for your support and look forward to bringing you some more awesome sharp and pointy things!

Furey’s Urban Combat Knives -Unlimited utilizes booking commissioned builds of custom knives and tools in order to ensure realistic turnaround times for the customer once a booking is finalized and official.  In order to have a knife commissioned, the customer must contact me and “hammer out” the details of the build, to include design, materials, timeline/turnaround, and price.

The current books re-opened on February 10th, 2017 and orders have been steadily pouring in and extending the turnaround time from start to finish.  When the books open, initial turnaround is usually between 30 to 45 days and grows as the influx of orders continues.  Many custom makers let their books extend out to turnaround times in excess of 1 to 2 years in some cases.  I strive to not let the turnaround exceed 180 days at the maximum, so when that threshold is reached, I close my books until orders are caught up.

During the “closed” books, I still produce new “one-off” knives and rotation (regularly produced) knives to be sold and raffled.  The current turnaround in  60 to 70 days.

If you are interested in a custom build, you will find the Custom Build/Payment Policy on the “About” page.  Please contact me to get your custom knife underway!

This is the second knife that will be in the following month’s (September 2017) Blade magazine, under the “What’s New” section.  This will follow August’s article under the “Knifemaker Showcase.”

The knife is the “Hakai” Bowie.

I am honored to have been advised by the national knife publication, Blade Magazine, that I will be featured in the August edition of the “Knifemaker Showcase.”  The “Hebi” (Japanese for Serpent) mini-Bowie knife (Pictured above) will be showcased, as well as my background and information on my knife making.

The following month, I will have another knife showcased in the “What’s New” section of Blade as well.  It is an honor and a privilege to make it into the magazine.

The “Hebi” mini-Bowie is made of 22-layer takefu suminigashi Japanese steel.  It has black G10 bolsters and pommels, with emerald green jigged bone handle scales, attached with in-house made mosaic pins, as well as a 1/4″ brass lanyard tube and accompanying 1/8″ brass front pin.

I want to welcome you to Furey’s Urban Combat Knives – Unlimited, a veteran owned and operated business.

My name is Denny Furey and I am a full-time custom knife maker and bladesmith located in Spring, Texas. I specialize in self defense, fighting, military, and first responder oriented edged weapons, knives, and tools.  I am a military veteran of Operations Desert Shield/Storm/Provide Comfort and the Global War on Terrorism, having served 10-years (both active duty and reserves) in the United States Air Force Security Police/Forces.  I am also a former 20-year law enforcement veteran, having worked numerous aspects of the job from patrolman to chief of police in the state of Oklahoma.  I served in the capacity as a Senior SWAT Commander, Operator and Instructor, developing curriculum, to include edged weapons defense and application for SWAT schools.

After relocating from Oklahoma to Texas, a close friend and a professional knife maker suggested I try my hand at making them as well, considering my background.  I jumped in with both feet and found I had an affinity at developing and producing quality knives. I have been mentored by two extremely talented blade makers, as well as completed collaboration builds with other professional bladesmiths and makers.

If you are interested in having a knife commissioned and made, please feel free to contact me or visit me at: